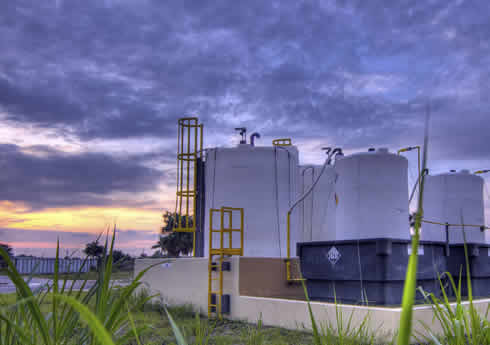 MDWASD opted to have the construction of the finished water reservoir, one of four planned at the treatment plant, and the high service pump building were completed as a stand-alone project, ahead of the overall plant construction, allowing the facility to be temporarily utilized as a remote finished water storage booster pump station for water produced at other treatment facilities. The use of the new finished water storage reservoir and high service pump station in this manner provides increased pressures and reliability to the southern end of the County’s distribution system until the new treatment facility is completed.

The original contract did not include provisions for providing electrical service and the ammonia and chlorine storage and feed systems. MDWASD subsequently authorized P&K for the additional work during the construction period. P&K successfully completed all testing of the reservoir, piping, instrumentation, SCADA and signaling, verifying proper functioning of the facility. More importantly, with the additional scope items, Poole & Kent still managed to provide $530,000 in cost savings to the owner.

In March 2010, P&K was awarded the contract for construction of the Reservoir and High Service Pump Building. The project included the following components:

P&K was responsible for scheduling, coordination, procurement, and execution of all aspects of construction of the facilities and equipment. The heavily reinforced concrete reservoir is essentially buried on three sides and on top, shielding it from the residential neighborhood to the west. Due to the subsurface geotechnical characteristics in the area, a foundation system of auger cast piles was utilized under the reservoir and the building to provide additional support for both structures. Dewatering was extensive and required the use of seven pumps, ranging from 6" to 24", to keep the work areas dry. The project required unusually large concrete pours for the castin- place structures. The approximately 33,500 square foot tank required a two foot slab. Pours were done in 12-hour shifts with P&K crews working overnight to oversee the pours. 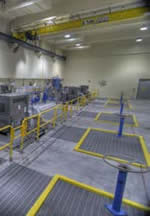