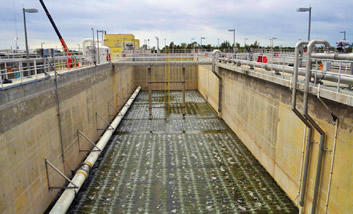 When a nearly 60-percent population increase put significant pressure on its water and wastewater capacity, this client undertook an $873-million Facility and Utility Expansion Program (FEP) for its water, wastewater, and reclaimed water infrastructure. This included expanding the City's Southwest Water Reclamation Facility (WRF) from a treatment capacity of 6.1 mgd (million gallons per day) to 15.1 mgd.

In 2001, to meet its FEP goals, the client arranged for MWH to be program manager under a program-manager-at-risk agreement. In December 2006, MWH contracted with Poole & Kent for the largest portion of the WRF construction, including all plant facilities with the exception of electrical, instrumentation, and controls improvements. Though Poole and Kent's contract scope did not include these improvements, the company was responsible for extensive design discipline cross-checking and coordination with other contractors working at the site to ensure that construction proceeded smoothly.

Overall, the FEP program, of which this project was a component, was delivered ahead of schedule, saving the client over $20 million, and winning the Engineering News Record "Southeast Best of 2011 Project" in the best civil works/infrastructure project category." At the same time, the Design-Build Institute of America gave Poole & Kent's WRF project the "2011 National Design-Build Award".

Construction of the new facilities, including a major tie-in at the headworks, was completed in three phases over a 28-month period. This required extensive planning and coordination to maintain existing plant operations and minimize disruptions.

Blair M. Lavoie, P.E., senior vice president and director of MWH Constructors said, "(Poole & Kent Company of Florida was) able to achieve their goals of minimizing plant disruptions during the expansion while completing the project on time, on budget with no safety incidents." 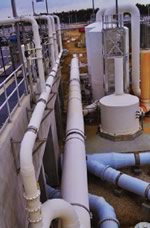