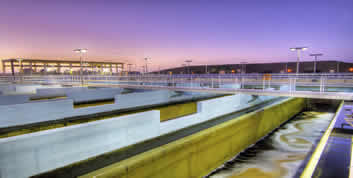 To upgrade its water filtration system capacity, as well as reclaimed water standards.

P&K’s contract also required full-scale performance testing of the filter system to meet the specified performance requirement of less than 5 parts per million total suspended solids (ppm TSS) in the filtered effluent. During testing, the system far exceeded this Contract requirement, consistently producing effluent with TSS of less than 1 ppm.

In June 2008, Poole & Kent Company of Florida (P&K) was awarded the contract for construction of the HLD Filter System Upgrade, one of the largest deep bed sand filter systems in the United States, consisting of 30 cells measuring 15.25 feet by 88 feet with six feet of sand filter media and with space for future expansion up to 48 cells.
Improvements included under the project include the following components:

In addition, shortly after the Contract was awarded to P&K, MDWASD replaced the project’s electrical engineer. The new electrical engineer modified a substantial portion of the electrical design. The changes not only affected the electrical portion of work, but also the structural, mechanical, and instrumentation work. These changes were made as the respective work was being performed. P&K coordinated these changes between the design team and its electrical subcontractor, as well as it’s others subcontractors, while at the same time maintaining and improving upon the project schedule.

In 2004, Miami-Dade Water and Sewer Department (MDWASD) entered into a Consent Decree with the United States Environmental Protection Agency which mandated that the County’s South District Wastewater Treatment Plant be upgraded to incorporate a 285 million gallon per day (mgd) capacity reclaimed water filtration system. In addition, the Decree mandated that the facility meet Florida Department of Environmental Protection (FDEP) High Level Disinfection (HLD) reclaimed water standards, as well as water quality equivalent to primary drinking water standards. This facility will be the largest in Florida to treat wastewater to these stringent standards, and the treated wastewater will be reclaimed for use as electrical cogeneration cooling water and for irrigation of green space at Zoo Miami (previously known as Miami Metro Zoo). Due to the aggressive completion schedule mandated in the Decree, planning, pilot testing, design, and construction were fast-tracked.